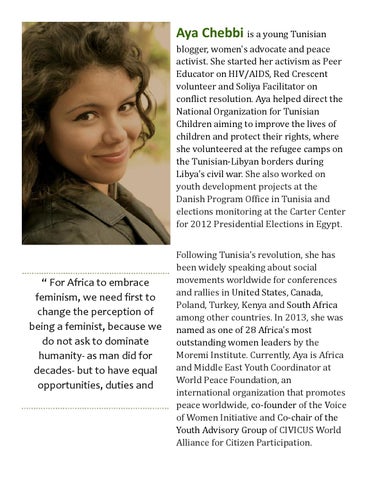 Aya Chebbi is a young Tunisian blogger, women&#39;s advocate and peace activist. She started her activism as Peer Educator on HIV/AIDS, Red Crescent volunteer and Soliya Facilitator on conflict resolution. Aya helped direct the National Organization for Tunisian Children aiming to improve the lives of children and protect their rights, where she volunteered at the refugee camps on the Tunisian-Libyan borders during Libya’s civil war. She also worked on youth development projects at the Danish Program Office in Tunisia and elections monitoring at the Carter Center for 2012 Presidential Elections in Egypt.

“ For Africa to embrace feminism, we need first to change the perception of being a feminist, because we do not ask to dominate humanity- as man did for decades- but to have equal opportunities, duties and

Following Tunisia’s revolution, she has been widely speaking about social movements worldwide for conferences and rallies in United States, Canada, Poland, Turkey, Kenya and South Africa among other countries. In 2013, she was named as one of 28 Africa&#39;s most outstanding women leaders by the Moremi Institute. Currently, Aya is Africa and Middle East Youth Coordinator at World Peace Foundation, an international organization that promotes peace worldwide, co-founder of the Voice of Women Initiative and Co-chair of the Youth Advisory Group of CIVICUS World Alliance for Citizen Participation.