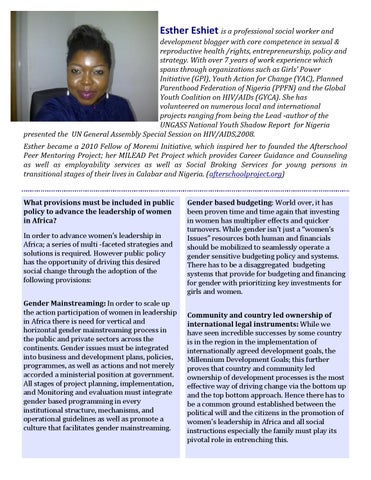 Esther Eshiet is a professional social worker and development blogger with core competence in sexual &amp; reproductive health /rights, entrepreneurship, policy and strategy. With over 7 years of work experience which spans through organizations such as Girls’ Power Initiative (GPI), Youth Action for Change (YAC), Planned Parenthood Federation of Nigeria (PPFN) and the Global Youth Coalition on HIV/AIDs (GYCA). She has volunteered on numerous local and international projects ranging from being the Lead -author of the UNGASS National Youth Shadow Report for Nigeria presented the UN General Assembly Special Session on HIV/AIDS,2008. Esther became a 2010 Fellow of Moremi Initiative, which inspired her to founded the Afterschool Peer Mentoring Project; her MILEAD Pet Project which provides Career Guidance and Counseling as well as employability services as well as Social Broking Services for young persons in transitional stages of their lives in Calabar and Nigeria. (afterschoolproject.org)

What provisions must be included in public policy to advance the leadership of women in Africa? In order to advance women’s leadership in Africa; a series of multi -faceted strategies and solutions is required. However public policy has the opportunity of driving this desired social change through the adoption of the following provisions: Gender Mainstreaming: In order to scale up the action participation of women in leadership in Africa there is need for vertical and horizontal gender mainstreaming process in the public and private sectors across the continents. Gender issues must be integrated into business and development plans, policies, programmes, as well as actions and not merely accorded a ministerial position at government. All stages of project planning, implementation, and Monitoring and evaluation must integrate gender based programming in every institutional structure, mechanisms, and operational guidelines as well as promote a culture that facilitates gender mainstreaming.

Gender based budgeting: World over, it has been proven time and time again that investing in women has multiplier effects and quicker turnovers. While gender isn’t just a “women’s Issues” resources both human and financials should be mobilized to seamlessly operate a gender sensitive budgeting policy and systems. There has to be a disaggregated budgeting systems that provide for budgeting and financing for gender with prioritizing key investments for girls and women. Community and country led ownership of international legal instruments: While we have seen incredible successes by some country is in the region in the implementation of internationally agreed development goals, the Millennium Development Goals; this further proves that country and community led ownership of development processes is the most effective way of driving change via the bottom up and the top bottom approach. Hence there has to be a common ground established between the political will and the citizens in the promotion of women’s leadership in Africa and all social instructions especially the family must play its pivotal role in entrenching this.