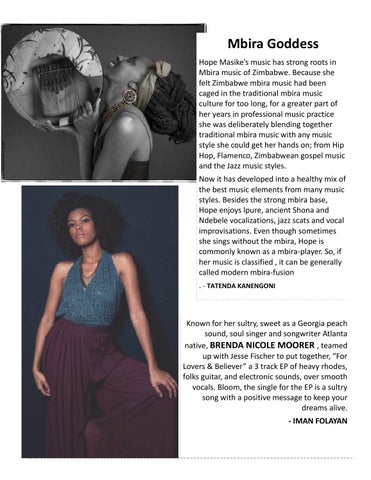 Mbira Goddess Hope Masike’s music has strong roots in Mbira music of Zimbabwe. Because she felt Zimbabwe mbira music had been caged in the traditional mbira music culture for too long, for a greater part of her years in professional music practice she was deliberately blending together traditional mbira music with any music style she could get her hands on; from Hip Hop, Flamenco, Zimbabwean gospel music and the Jazz music styles. Now it has developed into a healthy mix of the best music elements from many music styles. Besides the strong mbira base, Hope enjoys lpure, ancient Shona and Ndebele vocalizations, jazz scats and vocal improvisations. Even though sometimes she sings without the mbira, Hope is commonly known as a mbira-player. So, if her music is classified , it can be generally called modern mbira-fusion . - TATENDA KANENGONI

Known for her sultry, sweet as a Georgia peach sound, soul singer and songwriter Atlanta native, BRENDA NICOLE MOORER , teamed up with Jesse Fischer to put together, “For Lovers &amp; Believer” a 3 track EP of heavy rhodes, folks guitar, and electronic sounds, over smooth vocals. Bloom, the single for the EP is a sultry song with a positive message to keep your dreams alive. - IMAN FOLAYAN