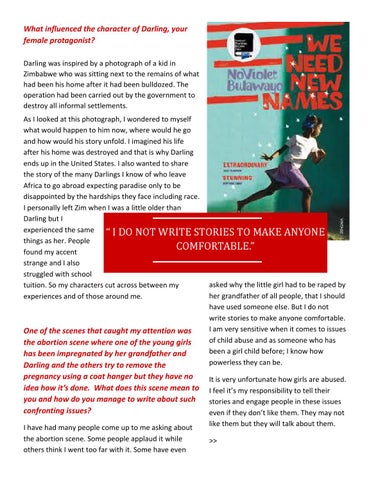 What influenced the character of Darling, your female protagonist? Darling was inspired by a photograph of a kid in Zimbabwe who was sitting next to the remains of what had been his home after it had been bulldozed. The operation had been carried out by the government to destroy all informal settlements. As I looked at this photograph, I wondered to myself what would happen to him now, where would he go and how would his story unfold. I imagined his life after his home was destroyed and that is why Darling ends up in the United States. I also wanted to share the story of the many Darlings I know of who leave Africa to go abroad expecting paradise only to be disappointed by the hardships they face including race. I personally left Zim when I was a little older than Darling but I experienced the same “ I DO NOT WRITE STORIES TO MAKE ANYONE things as her. People COMFORTABLE.” found my accent strange and I also struggled with school asked why the little girl had to be raped by tuition. So my characters cut across between my her grandfather of all people, that I should experiences and of those around me. have used someone else. But I do not write stories to make anyone comfortable. I am very sensitive when it comes to issues One of the scenes that caught my attention was of child abuse and as someone who has the abortion scene where one of the young girls been a girl child before; I know how has been impregnated by her grandfather and powerless they can be. Darling and the others try to remove the

pregnancy using a coat hanger but they have no idea how it’s done. What does this scene mean to you and how do you manage to write about such confronting issues? I have had many people come up to me asking about the abortion scene. Some people applaud it while others think I went too far with it. Some have even

It is very unfortunate how girls are abused. I feel it’s my responsibility to tell their stories and engage people in these issues even if they don’t like them. They may not like them but they will talk about them. &gt;&gt;