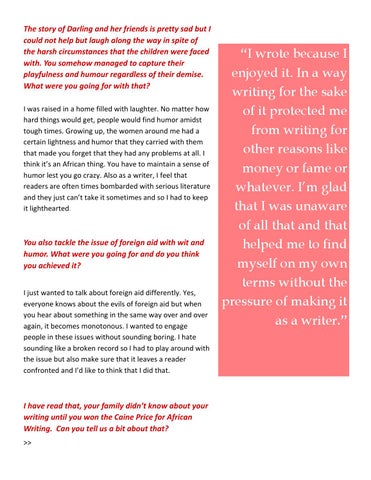 The story of Darling and her friends is pretty sad but I could not help but laugh along the way in spite of the harsh circumstances that the children were faced with. You somehow managed to capture their playfulness and humour regardless of their demise. What were you going for with that? I was raised in a home filled with laughter. No matter how hard things would get, people would find humor amidst tough times. Growing up, the women around me had a certain lightness and humor that they carried with them that made you forget that they had any problems at all. I think it’s an African thing. You have to maintain a sense of humor lest you go crazy. Also as a writer, I feel that readers are often times bombarded with serious literature and they just can’t take it sometimes and so I had to keep it lighthearted.

You also tackle the issue of foreign aid with wit and humor. What were you going for and do you think you achieved it? I just wanted to talk about foreign aid differently. Yes, everyone knows about the evils of foreign aid but when you hear about something in the same way over and over again, it becomes monotonous. I wanted to engage people in these issues without sounding boring. I hate sounding like a broken record so I had to play around with the issue but also make sure that it leaves a reader confronted and I’d like to think that I did that.

I have read that, your family didn’t know about your writing until you won the Caine Price for African Writing. Can you tell us a bit about that? &gt;&gt;

“I wrote because I enjoyed it. In a way writing for the sake of it protected me from writing for other reasons like money or fame or whatever. I’m glad that I was unaware of all that and that helped me to find myself on my own terms without the pressure of making it as a writer.”