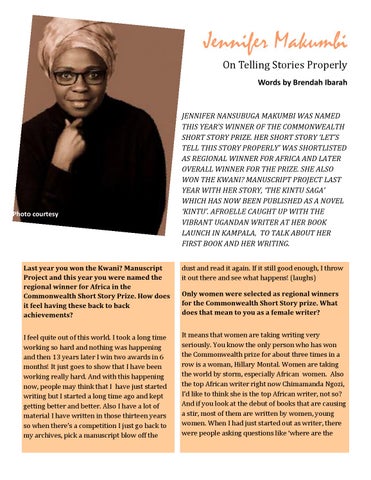 JENNIFER NANSUBUGA MAKUMBI WAS NAMED THIS YEAR’S WINNER OF THE COMMONWEALTH SHORT STORY PRIZE. HER SHORT STORY ‘LET’S TELL THIS STORY PROPERLY’ WAS SHORTLISTED AS REGIONAL WINNER FOR AFRICA AND LATER OVERALL WINNER FOR THE PRIZE. SHE ALSO WON THE KWANI? MANUSCRIPT PROJECT LAST YEAR WITH HER STORY, ‘THE KINTU SAGA’ WHICH HAS NOW BEEN PUBLISHED AS A NOVEL ‘KINTU’. AFROELLE CAUGHT UP WITH THE VIBRANT UGANDAN WRITER AT HER BOOK LAUNCH IN KAMPALA, TO TALK ABOUT HER FIRST BOOK AND HER WRITING.

Last year you won the Kwani? Manuscript Project and this year you were named the regional winner for Africa in the Commonwealth Short Story Prize. How does it feel having these back to back achievements?

dust and read it again. If it still good enough, I throw it out there and see what happens! (laughs)

I feel quite out of this world. I took a long time working so hard and nothing was happening and then 13 years later I win two awards in 6 months! It just goes to show that I have been working really hard. And with this happening now, people may think that I have just started writing but I started a long time ago and kept getting better and better. Also I have a lot of material I have written in those thirteen years so when there’s a competition I just go back to my archives, pick a manuscript blow off the

It means that women are taking writing very seriously. You know the only person who has won the Commonwealth prize for about three times in a row is a woman, Hillary Montal. Women are taking the world by storm, especially African women. Also the top African writer right now Chimamanda Ngozi, I’d like to think she is the top African writer, not so? And if you look at the debut of books that are causing a stir, most of them are written by women, young women. When I had just started out as writer, there were people asking questions like ‘where are the

Only women were selected as regional winners for the Commonwealth Short Story prize. What does that mean to you as a female writer?