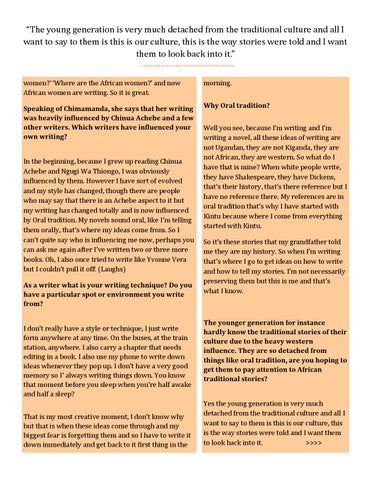 “The young generation is very much detached from the traditional culture and all I want to say to them is this is our culture, this is the way stories were told and I want them to look back into it.” women?’ ‘Where are the African women?’ and now African women are writing. So it is great.

Speaking of Chimamanda, she says that her writing was heavily influenced by Chinua Achebe and a few other writers. Which writers have influenced your own writing?

In the beginning, because I grew up reading Chinua Achebe and Ngugi Wa Thiongo, I was obviously influenced by them. However I have sort of evolved and my style has changed, though there are people who may say that there is an Achebe aspect to it but my writing has changed totally and is now influenced by Oral tradition. My novels sound oral, like I’m telling them orally, that’s where my ideas come from. So I can’t quite say who is influencing me now, perhaps you can ask me again after I’ve written two or three more books. Oh, I also once tried to write like Yvonne Vera but I couldn’t pull it off! (Laughs) As a writer what is your writing technique? Do you have a particular spot or environment you write from? I don’t really have a style or technique, I just write form anywhere at any time. On the buses, at the train station, anywhere. I also carry a chapter that needs editing in a book. I also use my phone to write down ideas whenever they pop up. I don’t have a very good memory so I’ always writing things down. You know that moment before you sleep when you’re half awake and half a sleep? That is my most creative moment, I don’t know why but that is when these ideas come through and my biggest fear is forgetting them and so I have to write it down immediately and get back to it first thing in the

Well you see, because I’m writing and I’m writing a novel, all these ideas of writing are not Ugandan, they are not Kiganda, they are not African, they are western. So what do I have that is mine? When white people write, they have Shakespeare, they have Dickens, that’s their history, that’s there reference but I have no reference there. My references are in oral tradition that’s why I have started with Kintu because where I come from everything started with Kintu. So it’s these stories that my grandfather told me they are my history. So when I’m writing that’s where I go to get ideas on how to write and how to tell my stories. I’m not necessarily preserving them but this is me and that’s what I know.

The younger generation for instance hardly know the traditional stories of their culture due to the heavy western influence. They are so detached from things like oral tradition, are you hoping to get them to pay attention to African traditional stories? Yes the young generation is very much detached from the traditional culture and all I want to say to them is this is our culture, this is the way stories were told and I want them to look back into it. &gt;&gt;&gt;&gt;