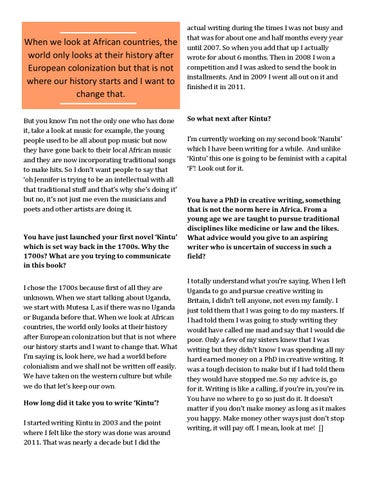 When we look at African countries, the world only looks at their history after European colonization but that is not where our history starts and I want to change that. But you know I’m not the only one who has done it, take a look at music for example, the young people used to be all about pop music but now they have gone back to their local African music and they are now incorporating traditional songs to make hits. So I don’t want people to say that ‘oh Jennifer is trying to be an intellectual with all that traditional stuff and that’s why she’s doing it’ but no, it’s not just me even the musicians and poets and other artists are doing it.

You have just launched your first novel ‘Kintu’ which is set way back in the 1700s. Why the 1700s? What are you trying to communicate in this book? I chose the 1700s because first of all they are unknown. When we start talking about Uganda, we start with Mutesa I, as if there was no Uganda or Buganda before that. When we look at African countries, the world only looks at their history after European colonization but that is not where our history starts and I want to change that. What I’m saying is, look here, we had a world before colonialism and we shall not be written off easily. We have taken on the western culture but while we do that let’s keep our own. How long did it take you to write ‘Kintu’? I started writing Kintu in 2003 and the point where I felt like the story was done was around 2011. That was nearly a decade but I did the

actual writing during the times I was not busy and that was for about one and half months every year until 2007. So when you add that up I actually wrote for about 6 months. Then in 2008 I won a competition and I was asked to send the book in installments. And in 2009 I went all out on it and finished it in 2011.

So what next after Kintu? I’m currently working on my second book ‘Nambi’ which I have been writing for a while. And unlike ‘Kintu’ this one is going to be feminist with a capital ‘F’! Look out for it.

You have a PhD in creative writing, something that is not the norm here in Africa. From a young age we are taught to pursue traditional disciplines like medicine or law and the likes. What advice would you give to an aspiring writer who is uncertain of success in such a field? I totally understand what you’re saying. When I left Uganda to go and pursue creative writing in Britain, I didn’t tell anyone, not even my family. I just told them that I was going to do my masters. If I had told them I was going to study writing they would have called me mad and say that I would die poor. Only a few of my sisters knew that I was writing but they didn’t know I was spending all my hard earned money on a PhD in creative writing. It was a tough decision to make but if I had told them they would have stopped me. So my advice is, go for it. Writing is like a calling, if you’re in, you’re in. You have no where to go so just do it. It doesn’t matter if you don’t make money as long as it makes you happy. Make money other ways just don’t stop writing, it will pay off. I mean, look at me! []