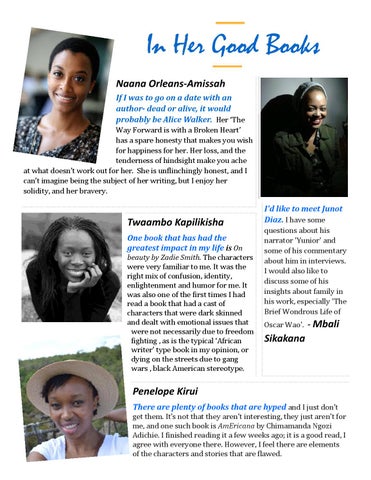 In Her Good Books Naana Orleans-Amissah If I was to go on a date with an author- dead or alive, it would probably be Alice Walker. Her ‘The Way Forward is with a Broken Heart’ has a spare honesty that makes you wish for happiness for her. Her loss, and the tenderness of hindsight make you ache at what doesn’t work out for her. She is unflinchingly honest, and I can’t imagine being the subject of her writing, but I enjoy her solidity, and her bravery.

Twaambo Kapilikisha One book that has had the greatest impact in my life is On beauty by Zadie Smith. The characters were very familiar to me. It was the right mix of confusion, identity, enlightenment and humor for me. It was also one of the first times I had read a book that had a cast of characters that were dark skinned and dealt with emotional issues that were not necessarily due to freedom fighting , as is the typical ‘African writer’ type book in my opinion, or dying on the streets due to gang wars , black American stereotype.

I&#39;d like to meet Junot Diaz. I have some questions about his narrator &#39;Yunior&#39; and some of his commentary about him in interviews. I would also like to discuss some of his insights about family in his work, especially &#39;The Brief Wondrous Life of Oscar Wao&#39;.

Penelope Kirui There are plenty of books that are hyped and I just don’t get them. It’s not that they aren’t interesting, they just aren’t for me, and one such book is AmEricana by Chimamanda Ngozi Adichie. I finished reading it a few weeks ago; it is a good read, I agree with everyone there. However, I feel there are elements of the characters and stories that are flawed.