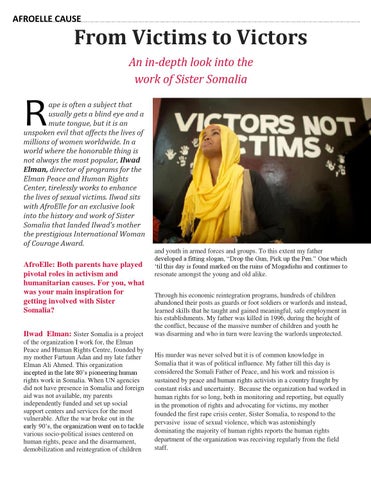 ape is often a subject that usually gets a blind eye and a mute tongue, but it is an unspoken evil that affects the lives of millions of women worldwide. In a world where the honorable thing is not always the most popular, Ilwad Elman, director of programs for the Elman Peace and Human Rights Center, tirelessly works to enhance the lives of sexual victims. Ilwad sits with AfroElle for an exclusive look into the history and work of Sister Somalia that landed Ilwad’s mother the prestigious International Woman of Courage Award. AfroElle: Both parents have played pivotal roles in activism and humanitarian causes. For you, what was your main inspiration for getting involved with Sister Somalia?

and youth in armed forces and groups. To this extent my father developed a fitting slogan, “Drop the Gun, Pick up the Pen.” One which „til this day is found marked on the ruins of Mogadishu and continues to resonate amongst the young and old alike.

Through his economic reintegration programs, hundreds of children abandoned their posts as guards or foot soldiers or warlords and instead, learned skills that he taught and gained meaningful, safe employment in his establishments. My father was killed in 1996, during the height of the conflict, because of the massive number of children and youth he was disarming and who in turn were leaving the warlords unprotected.

of the organization I work for, the Elman Peace and Human Rights Centre, founded by my mother Fartuun Adan and my late father Elman Ali Ahmed. This organization incepted in the late 80‟s pioneering human rights work in Somalia. When UN agencies did not have presence in Somalia and foreign aid was not available, my parents independently funded and set up social support centers and services for the most vulnerable. After the war broke out in the early 90‟s, the organization went on to tackle various socio-political issues centered on human rights, peace and the disarmament, demobilization and reintegration of children

His murder was never solved but it is of common knowledge in Somalia that it was of political influence. My father till this day is considered the Somali Father of Peace, and his work and mission is sustained by peace and human rights activists in a country fraught by constant risks and uncertainty. Because the organization had worked in human rights for so long, both in monitoring and reporting, but equally in the promotion of rights and advocating for victims, my mother founded the first rape crisis center, Sister Somalia, to respond to the pervasive issue of sexual violence, which was astonishingly dominating the majority of human rights reports the human rights department of the organization was receiving regularly from the field staff.