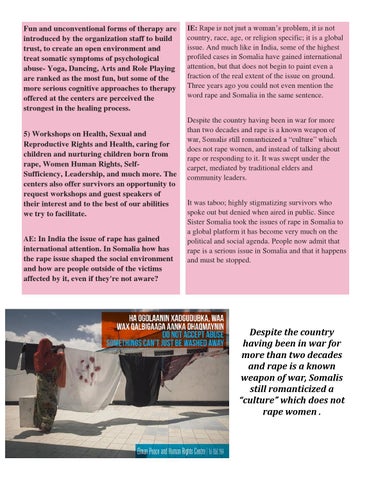 Fun and unconventional forms of therapy are introduced by the organization staff to build trust, to create an open environment and treat somatic symptoms of psychological abuse- Yoga, Dancing, Arts and Role Playing are ranked as the most fun, but some of the more serious cognitive approaches to therapy offered at the centers are perceived the strongest in the healing process. 5) Workshops on Health, Sexual and Reproductive Rights and Health, caring for children and nurturing children born from rape, Women Human Rights, SelfSufficiency, Leadership, and much more. The centers also offer survivors an opportunity to request workshops and guest speakers of their interest and to the best of our abilities we try to facilitate. AE: In India the issue of rape has gained

international attention. In Somalia how has the rape issue shaped the social environment and how are people outside of the victims affected by it, even if they&#39;re not aware?

IE: Rape is not just a woman‟s problem, it is not country, race, age, or religion specific; it is a global issue. And much like in India, some of the highest profiled cases in Somalia have gained international attention, but that does not begin to paint even a fraction of the real extent of the issue on ground. Three years ago you could not even mention the word rape and Somalia in the same sentence.

Despite the country having been in war for more than two decades and rape is a known weapon of war, Somalis still romanticized a “culture” which does not rape women, and instead of talking about rape or responding to it. It was swept under the carpet, mediated by traditional elders and community leaders. It was taboo; highly stigmatizing survivors who spoke out but denied when aired in public. Since Sister Somalia took the issues of rape in Somalia to a global platform it has become very much on the political and social agenda. People now admit that rape is a serious issue in Somalia and that it happens and must be stopped.

Despite the country having been in war for more than two decades and rape is a known weapon of war, Somalis still romanticized a “culture” which does not rape women .