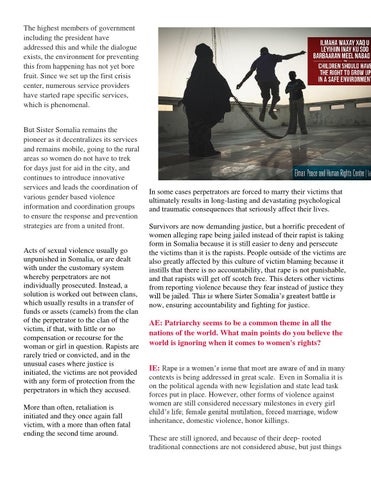 The highest members of government including the president have addressed this and while the dialogue exists, the environment for preventing this from happening has not yet bore fruit. Since we set up the first crisis center, numerous service providers have started rape specific services, which is phenomenal. But Sister Somalia remains the pioneer as it decentralizes its services and remains mobile, going to the rural areas so women do not have to trek for days just for aid in the city, and continues to introduce innovative services and leads the coordination of various gender based violence information and coordination groups to ensure the response and prevention strategies are from a united front. Acts of sexual violence usually go unpunished in Somalia, or are dealt with under the customary system whereby perpetrators are not individually prosecuted. Instead, a solution is worked out between clans, which usually results in a transfer of funds or assets (camels) from the clan of the perpetrator to the clan of the victim, if that, with little or no compensation or recourse for the woman or girl in question. Rapists are rarely tried or convicted, and in the unusual cases where justice is initiated, the victims are not provided with any form of protection from the perpetrators in which they accused. More than often, retaliation is initiated and they once again fall victim, with a more than often fatal ending the second time around.

In some cases perpetrators are forced to marry their victims that ultimately results in long-lasting and devastating psychological and traumatic consequences that seriously affect their lives. Survivors are now demanding justice, but a horrific precedent of women alleging rape being jailed instead of their rapist is taking form in Somalia because it is still easier to deny and persecute the victims than it is the rapists. People outside of the victims are also greatly affected by this culture of victim blaming because it instills that there is no accountability, that rape is not punishable, and that rapists will get off scotch free. This deters other victims from reporting violence because they fear instead of justice they will be jailed. This is where Sister Somaliaâ&amp;#x20AC;&amp;#x;s greatest battle is now, ensuring accountability and fighting for justice.

AE: Patriarchy seems to be a common theme in all the nations of the world. What main points do you believe the world is ignoring when it comes to women&#39;s rights? IE: Rape is a womenâ&amp;#x20AC;&amp;#x;s issue that most are aware of and in many contexts is being addressed in great scale. Even in Somalia it is on the political agenda with new legislation and state lead task forces put in place. However, other forms of violence against women are still considered necessary milestones in every girl childâ&amp;#x20AC;&amp;#x;s life; female genital mutilation, forced marriage, widow inheritance, domestic violence, honor killings. These are still ignored, and because of their deep- rooted traditional connections are not considered abuse, but just things