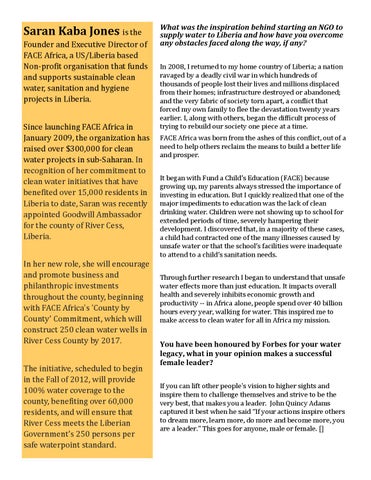 Saran Kaba Jones is the Founder and Executive Director of FACE Africa, a US/Liberia based Non-profit organisation that funds and supports sustainable clean water, sanitation and hygiene projects in Liberia. Since launching FACE Africa in January 2009, the organization has raised over $300,000 for clean water projects in sub-Saharan. In recognition of her commitment to clean water initiatives that have benefited over 15,000 residents in Liberia to date, Saran was recently appointed Goodwill Ambassador for the county of River Cess, Liberia.

What was the inspiration behind starting an NGO to supply water to Liberia and how have you overcome any obstacles faced along the way, if any? In 2008, I returned to my home country of Liberia; a nation ravaged by a deadly civil war in which hundreds of thousands of people lost their lives and millions displaced from their homes; infrastructure destroyed or abandoned; and the very fabric of society torn apart, a conflict that forced my own family to flee the devastation twenty years earlier. I, along with others, began the difficult process of trying to rebuild our society one piece at a time. FACE Africa was born from the ashes of this conflict, out of a need to help others reclaim the means to build a better life and prosper. It began with Fund a Child’s Education (FACE) because growing up, my parents always stressed the importance of investing in education. But I quickly realized that one of the major impediments to education was the lack of clean drinking water. Children were not showing up to school for extended periods of time, severely hampering their development. I discovered that, in a majority of these cases, a child had contracted one of the many illnesses caused by unsafe water or that the school’s facilities were inadequate to attend to a child’s sanitation needs.

In her new role, she will encourage and promote business and philanthropic investments throughout the county, beginning with FACE Africa&#39;s &#39;County by County’ Commitment, which will construct 250 clean water wells in River Cess County by 2017.

Through further research I began to understand that unsafe water effects more than just education. It impacts overall health and severely inhibits economic growth and productivity -- in Africa alone, people spend over 40 billion hours every year, walking for water. This inspired me to make access to clean water for all in Africa my mission.

The initiative, scheduled to begin in the Fall of 2012, will provide 100% water coverage to the county, benefiting over 60,000 residents, and will ensure that River Cess meets the Liberian Government’s 250 persons per safe waterpoint standard.

If you can lift other people&#39;s vision to higher sights and inspire them to challenge themselves and strive to be the very best, that makes you a leader. John Quincy Adams captured it best when he said “If your actions inspire others to dream more, learn more, do more and become more, you are a leader.” This goes for anyone, male or female. []

You have been honoured by Forbes for your water legacy, what in your opinion makes a successful female leader?