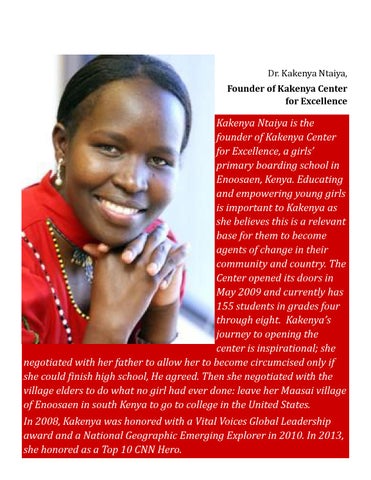 Kakenya Ntaiya is the founder of Kakenya Center for Excellence, a girlsâ&#x20AC;&#x2122; primary boarding school in Enoosaen, Kenya. Educating and empowering young girls is important to Kakenya as she believes this is a relevant base for them to become agents of change in their community and country. The Center opened its doors in May 2009 and currently has 155 students in grades four through eight. Kakenyaâ&#x20AC;&#x2122;s journey to opening the center is inspirational; she negotiated with her father to allow her to become circumcised only if she could finish high school, He agreed. Then she negotiated with the village elders to do what no girl had ever done: leave her Maasai village of Enoosaen in south Kenya to go to college in the United States. In 2008, Kakenya was honored with a Vital Voices Global Leadership award and a National Geographic Emerging Explorer in 2010. In 2013, she honored as a Top 10 CNN Hero.