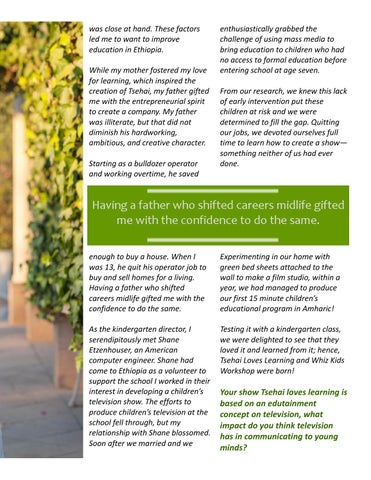 was close at hand. These factors led me to want to improve education in Ethiopia. While my mother fostered my love for learning, which inspired the creation of Tsehai, my father gifted me with the entrepreneurial spirit to create a company. My father was illiterate, but that did not diminish his hardworking, ambitious, and creative character. Starting as a bulldozer operator and working overtime, he saved

enthusiastically grabbed the challenge of using mass media to bring education to children who had no access to formal education before entering school at age seven. From our research, we knew this lack of early intervention put these children at risk and we were determined to fill the gap. Quitting our jobs, we devoted ourselves full time to learn how to create a show— something neither of us had ever done.

Experimenting in our home with green bed sheets attached to the wall to make a film studio, within a year, we had managed to produce our first 15 minute children’s educational program in Amharic!

As the kindergarten director, I serendipitously met Shane Etzenhouser, an American computer engineer. Shane had come to Ethiopia as a volunteer to support the school I worked in their interest in developing a children’s television show. The efforts to produce children’s television at the school fell through, but my relationship with Shane blossomed. Soon after we married and we

Testing it with a kindergarten class, we were delighted to see that they loved it and learned from it; hence, Tsehai Loves Learning and Whiz Kids Workshop were born!

Your show Tsehai loves learning is based on an edutainment concept on television, what impact do you think television has in communicating to young minds?