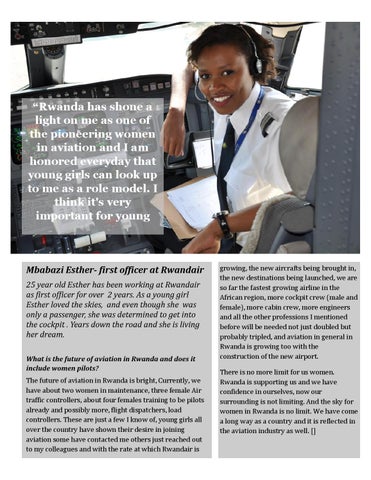 â&amp;#x20AC;&amp;#x153;Rwanda has shone a light on me as one of the pioneering women in aviation and I am honored everyday that young girls can look up to me as a role model. I think it&#39;s very important for young

Mbabazi Esther- first officer at Rwandair 25 year old Esther has been working at Rwandair as first officer for over 2 years. As a young girl Esther loved the skies, and even though she was only a passenger, she was determined to get into the cockpit . Years down the road and she is living her dream. What is the future of aviation in Rwanda and does it include women pilots? The future of aviation in Rwanda is bright, Currently, we have about two women in maintenance, three female Air traffic controllers, about four females training to be pilots already and possibly more, flight dispatchers, load controllers. These are just a few I know of, young girls all over the country have shown their desire in joining aviation some have contacted me others just reached out to my colleagues and with the rate at which Rwandair is

growing, the new aircrafts being brought in, the new destinations being launched, we are so far the fastest growing airline in the African region, more cockpit crew (male and female), more cabin crew, more engineers and all the other professions I mentioned before will be needed not just doubled but probably tripled, and aviation in general in Rwanda is growing too with the construction of the new airport. There is no more limit for us women. Rwanda is supporting us and we have confidence in ourselves, now our surrounding is not limiting. And the sky for women in Rwanda is no limit. We have come a long way as a country and it is reflected in the aviation industry as well. []