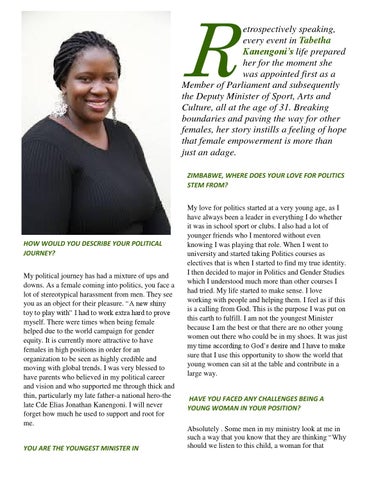 etrospectively speaking, every event in Tabetha Kanengoni’s life prepared her for the moment she was appointed first as a Member of Parliament and subsequently the Deputy Minister of Sport, Arts and Culture, all at the age of 31. Breaking boundaries and paving the way for other females, her story instills a feeling of hope that female empowerment is more than just an adage. ZIMBABWE, WHERE DOES YOUR LOVE FOR POLITICS STEM FROM?

HOW WOULD YOU DESCRIBE YOUR POLITICAL JOURNEY? My political journey has had a mixture of ups and downs. As a female coming into politics, you face a lot of stereotypical harassment from men. They see you as an object for their pleasure. “A new shiny toy to play with” I had to work extra hard to prove myself. There were times when being female helped due to the world campaign for gender equity. It is currently more attractive to have females in high positions in order for an organization to be seen as highly credible and moving with global trends. I was very blessed to have parents who believed in my political career and vision and who supported me through thick and thin, particularly my late father-a national hero-the late Cde Elias Jonathan Kanengoni. I will never forget how much he used to support and root for me. YOU ARE THE YOUNGEST MINISTER IN

My love for politics started at a very young age, as I have always been a leader in everything I do whether it was in school sport or clubs. I also had a lot of younger friends who I mentored without even knowing I was playing that role. When I went to university and started taking Politics courses as electives that is when I started to find my true identity. I then decided to major in Politics and Gender Studies which I understood much more than other courses I had tried. My life started to make sense. I love working with people and helping them. I feel as if this is a calling from God. This is the purpose I was put on this earth to fulfill. I am not the youngest Minister because I am the best or that there are no other young women out there who could be in my shoes. It was just my time according to God‟s desire and I have to make sure that I use this opportunity to show the world that young women can sit at the table and contribute in a large way.

HAVE YOU FACED ANY CHALLENGES BEING A YOUNG WOMAN IN YOUR POSITION? Absolutely . Some men in my ministry look at me in such a way that you know that they are thinking “Why should we listen to this child, a woman for that