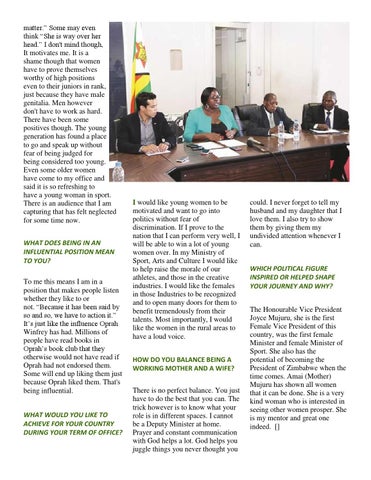 matter.” Some may even think “She is way over her head.” I don&#39;t mind though, It motivates me. It is a shame though that women have to prove themselves worthy of high positions even to their juniors in rank, just because they have male genitalia. Men however don&#39;t have to work as hard. There have been some positives though. The young generation has found a place to go and speak up without fear of being judged for being considered too young. Even some older women have come to my office and said it is so refreshing to have a young woman in sport. There is an audience that I am capturing that has felt neglected for some time now. WHAT DOES BEING IN AN INFLUENTIAL POSITION MEAN TO YOU? To me this means I am in a position that makes people listen whether they like to or not. “Because it has been said by so and so, we have to action it.” It‟s just like the influence Oprah Winfrey has had. Millions of people have read books in Oprah‟s book club that they otherwise would not have read if Oprah had not endorsed them. Some will end up liking them just because Oprah liked them. That&#39;s being influential. WHAT WOULD YOU LIKE TO ACHIEVE FOR YOUR COUNTRY DURING YOUR TERM OF OFFICE?

I would like young women to be motivated and want to go into politics without fear of discrimination. If I prove to the nation that I can perform very well, I will be able to win a lot of young women over. In my Ministry of Sport, Arts and Culture I would like to help raise the morale of our athletes, and those in the creative industries. I would like the females in those Industries to be recognized and to open many doors for them to benefit tremendously from their talents. Most importantly, I would like the women in the rural areas to have a loud voice. HOW DO YOU BALANCE BEING A WORKING MOTHER AND A WIFE? There is no perfect balance. You just have to do the best that you can. The trick however is to know what your role is in different spaces. I cannot be a Deputy Minister at home. Prayer and constant communication with God helps a lot. God helps you juggle things you never thought you

could. I never forget to tell my husband and my daughter that I love them. I also try to show them by giving them my undivided attention whenever I can. WHICH POLITICAL FIGURE INSPIRED OR HELPED SHAPE YOUR JOURNEY AND WHY? The Honourable Vice President Joyce Mujuru, she is the first Female Vice President of this country, was the first female Minister and female Minister of Sport. She also has the potential of becoming the President of Zimbabwe when the time comes. Amai (Mother) Mujuru has shown all women that it can be done. She is a very kind woman who is interested in seeing other women prosper. She is my mentor and great one indeed. []