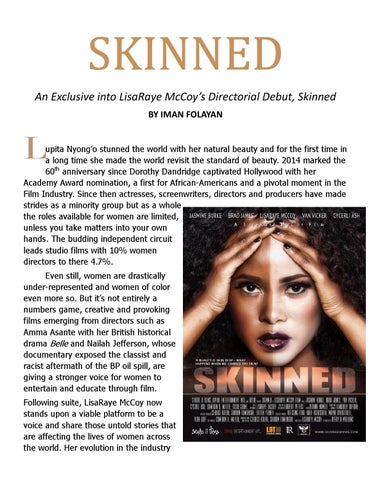 upita Nyong‟o stunned the world with her natural beauty and for the first time in a long time she made the world revisit the standard of beauty. 2014 marked the 60th anniversary since Dorothy Dandridge captivated Hollywood with her Academy Award nomination, a first for African-Americans and a pivotal moment in the Film Industry. Since then actresses, screenwriters, directors and producers have made strides as a minority group but as a whole the roles available for women are limited, unless you take matters into your own hands. The budding independent circuit leads studio films with 10% women directors to there 4.7%. Even still, women are drastically under-represented and women of color even more so. But it‟s not entirely a numbers game, creative and provoking films emerging from directors such as Amma Asante with her British historical drama Belle and Nailah Jefferson, whose documentary exposed the classist and racist aftermath of the BP oil spill, are giving a stronger voice for women to entertain and educate through film. Following suite, LisaRaye McCoy now stands upon a viable platform to be a voice and share those untold stories that are affecting the lives of women across the world. Her evolution in the industry