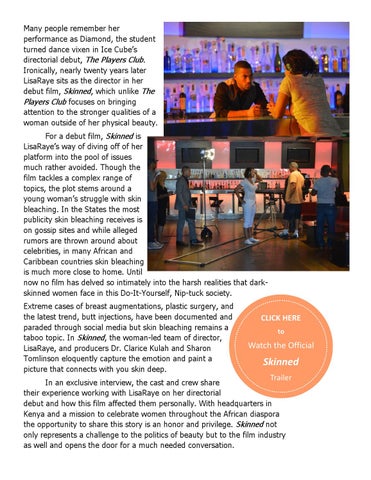 Many people remember her performance as Diamond, the student turned dance vixen in Ice Cube‟s directorial debut, The Players Club. Ironically, nearly twenty years later LisaRaye sits as the director in her debut film, Skinned, which unlike The Players Club focuses on bringing attention to the stronger qualities of a woman outside of her physical beauty. For a debut film, Skinned is LisaRaye‟s way of diving off of her platform into the pool of issues much rather avoided. Though the film tackles a complex range of topics, the plot stems around a young woman‟s struggle with skin bleaching. In the States the most publicity skin bleaching receives is on gossip sites and while alleged rumors are thrown around about celebrities, in many African and Caribbean countries skin bleaching is much more close to home. Until now no film has delved so intimately into the harsh realities that darkskinned women face in this Do-It-Yourself, Nip-tuck society. Extreme cases of breast augmentations, plastic surgery, and the latest trend, butt injections, have been documented and paraded through social media but skin bleaching remains a taboo topic. In Skinned, the woman-led team of director, LisaRaye, and producers Dr. Clarice Kulah and Sharon Tomlinson eloquently capture the emotion and paint a picture that connects with you skin deep.

In an exclusive interview, the cast and crew share their experience working with LisaRaye on her directorial debut and how this film affected them personally. With headquarters in Kenya and a mission to celebrate women throughout the African diaspora the opportunity to share this story is an honor and privilege. Skinned not only represents a challenge to the politics of beauty but to the film industry as well and opens the door for a much needed conversation.