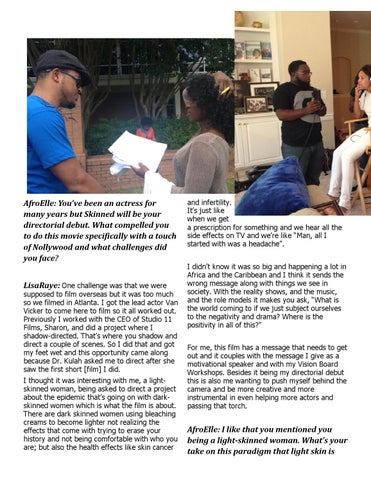 AfroElle: You’ve been an actress for many years but Skinned will be your directorial debut. What compelled you to do this movie specifically with a touch of Nollywood and what challenges did you face? LisaRaye: One challenge was that we were

supposed to film overseas but it was too much so we filmed in Atlanta. I got the lead actor Van Vicker to come here to film so it all worked out. Previously I worked with the CEO of Studio 11 Films, Sharon, and did a project where I shadow-directed. That‟s where you shadow and direct a couple of scenes. So I did that and got my feet wet and this opportunity came along because Dr. Kulah asked me to direct after she saw the first short [film] I did. I thought it was interesting with me, a lightskinned woman, being asked to direct a project about the epidemic that‟s going on with darkskinned women which is what the film is about. There are dark skinned women using bleaching creams to become lighter not realizing the effects that come with trying to erase your history and not being comfortable with who you are; but also the health effects like skin cancer

and infertility. It‟s just like when we get a prescription for something and we hear all the side effects on TV and we‟re like “Man, all I started with was a headache”. I didn‟t know it was so big and happening a lot in Africa and the Caribbean and I think it sends the wrong message along with things we see in society. With the reality shows, and the music, and the role models it makes you ask, “What is the world coming to if we just subject ourselves to the negativity and drama? Where is the positivity in all of this?” For me, this film has a message that needs to get out and it couples with the message I give as a motivational speaker and with my Vision Board Workshops. Besides it being my directorial debut this is also me wanting to push myself behind the camera and be more creative and more instrumental in even helping more actors and passing that torch.

AfroElle: I like that you mentioned you being a light-skinned woman. What’s your take on this paradigm that light skin is