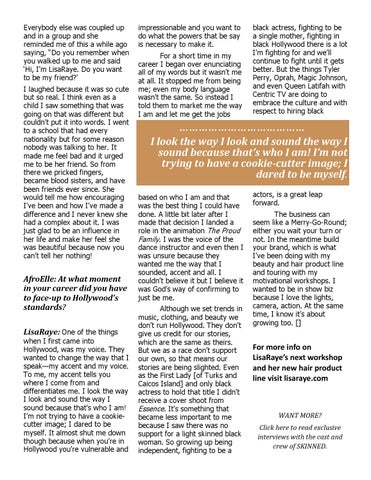 Everybody else was coupled up and in a group and she reminded me of this a while ago saying, “Do you remember when you walked up to me and said „Hi, I‟m LisaRaye. Do you want to be my friend?‟ I laughed because it was so cute but so real. I think even as a child I saw something that was going on that was different but couldn‟t put it into words. I went to a school that had every nationality but for some reason nobody was talking to her. It made me feel bad and it urged me to be her friend. So from there we pricked fingers, became blood sisters, and have been friends ever since. She would tell me how encouraging I‟ve been and how I‟ve made a difference and I never knew she had a complex about it. I was just glad to be an influence in her life and make her feel she was beautiful because now you can‟t tell her nothing!

AfroElle: At what moment in your career did you have to face-up to Hollywood’s standards? LisaRaye: One of the things

when I first came into Hollywood, was my voice. They wanted to change the way that I speak—my accent and my voice. To me, my accent tells you where I come from and differentiates me. I look the way I look and sound the way I sound because that‟s who I am! I‟m not trying to have a cookiecutter image; I dared to be myself. It almost shut me down though because when you‟re in Hollywood you‟re vulnerable and

impressionable and you want to do what the powers that be say is necessary to make it. For a short time in my career I began over enunciating all of my words but it wasn‟t me at all. It stopped me from being me; even my body language wasn‟t the same. So instead I told them to market me the way I am and let me get the jobs

black actress, fighting to be a single mother, fighting in black Hollywood there is a lot I‟m fighting for and we‟ll continue to fight until it gets better. But the things Tyler Perry, Oprah, Magic Johnson, and even Queen Latifah with Centric TV are doing to embrace the culture and with respect to hiring black

I look the way I look and sound the way I sound because that’s who I am! I’m not trying to have a cookie-cutter image; I dared to be myself. based on who I am and that was the best thing I could have done. A little bit later after I made that decision I landed a role in the animation The Proud Family. I was the voice of the dance instructor and even then I was unsure because they wanted me the way that I sounded, accent and all. I couldn‟t believe it but I believe it was God‟s way of confirming to just be me. Although we set trends in music, clothing, and beauty we don‟t run Hollywood. They don‟t give us credit for our stories, which are the same as theirs. But we as a race don‟t support our own, so that means our stories are being slighted. Even as the First Lady [of Turks and Caicos Island] and only black actress to hold that title I didn‟t receive a cover shoot from Essence. It‟s something that became less important to me because I saw there was no support for a light skinned black woman. So growing up being independent, fighting to be a

actors, is a great leap forward. The business can seem like a Merry-Go-Round; either you wait your turn or not. In the meantime build your brand, which is what I‟ve been doing with my beauty and hair product line and touring with my motivational workshops. I wanted to be in show biz because I love the lights, camera, action. At the same time, I know it‟s about growing too. []

For more info on LisaRaye’s next workshop and her new hair product line visit lisaraye.com

WANT MORE? Click here to read exclusive interviews with the cast and crew of SKINNED.