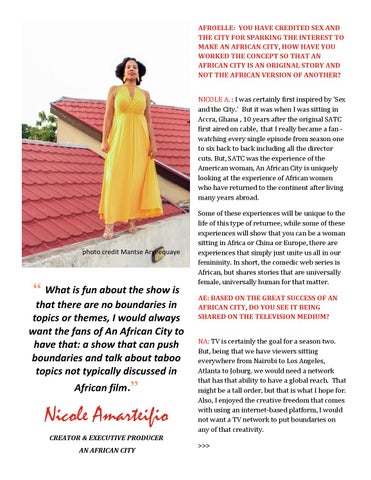 AFROELLE: YOU HAVE CREDITED SEX AND THE CITY FOR SPARKING THE INTEREST TO MAKE AN AFRICAN CITY, HOW HAVE YOU WORKED THE CONCEPT SO THAT AN AFRICAN CITY IS AN ORIGINAL STORY AND NOT THE AFRICAN VERSION OF ANOTHER? NICOLE A. : I was certainly first inspired by &#39;Sex and the City.&#39; But it was when I was sitting in Accra, Ghana , 10 years after the original SATC first aired on cable, that I really became a fan watching every single episode from season one to six back to back including all the director cuts. But, SATC was the experience of the American woman, An African City is uniquely looking at the experience of African women who have returned to the continent after living many years abroad.

“ What is fun about the show is that there are no boundaries in topics or themes, I would always want the fans of An African City to have that: a show that can push boundaries and talk about taboo topics not typically discussed in African film.”

Some of these experiences will be unique to the life of this type of returnee, while some of these experiences will show that you can be a woman sitting in Africa or China or Europe, there are experiences that simply just unite us all in our femininity. In short, the comedic web series is African, but shares stories that are universally female, universally human for that matter. AE: BASED ON THE GREAT SUCCESS OF AN AFRICAN CITY, DO YOU SEE IT BEING SHARED ON THE TELEVISION MEDIUM? NA: TV is certainly the goal for a season two. But, being that we have viewers sitting everywhere from Nairobi to Los Angeles, Atlanta to Joburg. we would need a network that has that ability to have a global reach. That might be a tall order, but that is what I hope for. Also, I enjoyed the creative freedom that comes with using an internet-based platform, I would not want a TV network to put boundaries on any of that creativity. &gt;&gt;&gt;