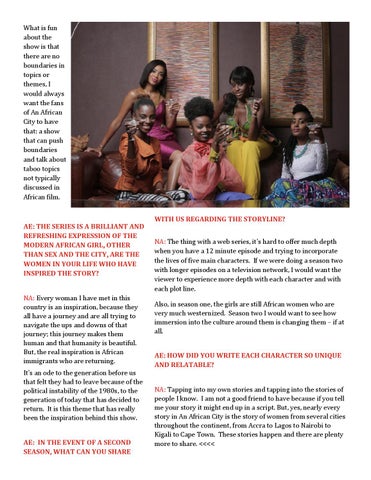 What is fun about the show is that there are no boundaries in topics or themes, I would always want the fans of An African City to have that: a show that can push boundaries and talk about taboo topics not typically discussed in African film.

AE: THE SERIES IS A BRILLIANT AND REFRESHING EXPRESSION OF THE MODERN AFRICAN GIRL, OTHER THAN SEX AND THE CITY, ARE THE WOMEN IN YOUR LIFE WHO HAVE INSPIRED THE STORY? NA: Every woman I have met in this country is an inspiration, because they all have a journey and are all trying to navigate the ups and downs of that journey; this journey makes them human and that humanity is beautiful. But, the real inspiration is African immigrants who are returning. It&#39;s an ode to the generation before us that felt they had to leave because of the political instability of the 1980s, to the generation of today that has decided to return. It is this theme that has really been the inspiration behind this show.

AE: IN THE EVENT OF A SECOND SEASON, WHAT CAN YOU SHARE

WITH US REGARDING THE STORYLINE? NA: The thing with a web series, it&#39;s hard to offer much depth when you have a 12 minute episode and trying to incorporate the lives of five main characters. If we were doing a season two with longer episodes on a television network, I would want the viewer to experience more depth with each character and with each plot line. Also, in season one, the girls are still African women who are very much westernized. Season two I would want to see how immersion into the culture around them is changing them â&amp;#x20AC;&amp;#x201C; if at all.

AE: HOW DID YOU WRITE EACH CHARACTER SO UNIQUE AND RELATABLE? NA: Tapping into my own stories and tapping into the stories of people I know. I am not a good friend to have because if you tell me your story it might end up in a script. But, yes, nearly every story in An African City is the story of women from several cities throughout the continent, from Accra to Lagos to Nairobi to Kigali to Cape Town. These stories happen and there are plenty more to share. &lt;&lt;&lt;&lt;