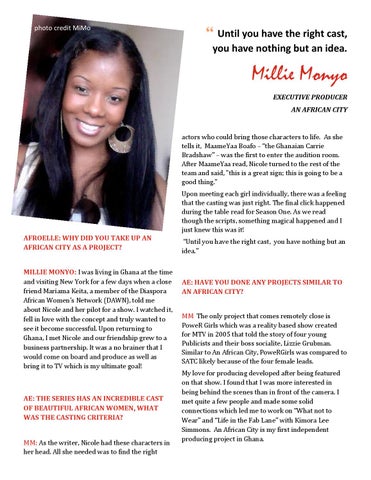 “ Until you have the right cast, you have nothing but an idea.

actors who could bring those characters to life. As she tells it, MaameYaa Boafo – “the Ghanaian Carrie Bradshaw” – was the first to enter the audition room. After MaameYaa read, Nicole turned to the rest of the team and said, &quot;this is a great sign; this is going to be a good thing.&quot;

AFROELLE: WHY DID YOU TAKE UP AN AFRICAN CITY AS A PROJECT? MILLIE MONYO: I was living in Ghana at the time and visiting New York for a few days when a close friend Mariama Keita, a member of the Diaspora African Women’s Network (DAWN), told me about Nicole and her pilot for a show. I watched it, fell in love with the concept and truly wanted to see it become successful. Upon returning to Ghana, I met Nicole and our friendship grew to a business partnership. It was a no brainer that I would come on board and produce as well as bring it to TV which is my ultimate goal!

AE: THE SERIES HAS AN INCREDIBLE CAST OF BEAUTIFUL AFRICAN WOMEN, WHAT WAS THE CASTING CRITERIA? MM: As the writer, Nicole had these characters in her head. All she needed was to find the right

Upon meeting each girl individually, there was a feeling that the casting was just right. The final click happened during the table read for Season One. As we read though the scripts, something magical happened and I just knew this was it! “Until you have the right cast, you have nothing but an idea.”

AE: HAVE YOU DONE ANY PROJECTS SIMILAR TO AN AFRICAN CITY? MM: The only project that comes remotely close is PoweR Girls which was a reality based show created for MTV in 2005 that told the story of four young Publicists and their boss socialite, Lizzie Grubman. Similar to An African City, PoweRGirls was compared to SATC likely because of the four female leads. My love for producing developed after being featured on that show. I found that I was more interested in being behind the scenes than in front of the camera. I met quite a few people and made some solid connections which led me to work on “What not to Wear” and “Life in the Fab Lane” with Kimora Lee Simmons. An African City is my first independent producing project in Ghana.