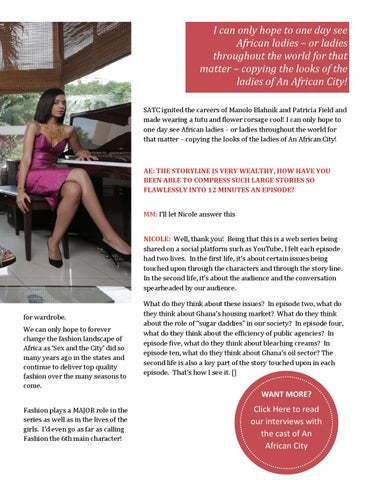 AE: THE STORYLINE IS VERY WEALTHY, HOW HAVE YOU BEEN ABLE TO COMPRESS SUCH LARGE STORIES SO FLAWLESSLY INTO 12 MINUTES AN EPISODE? MM: I’ll let Nicole answer this NICOLE: Well, thank you! Being that this is a web series being shared on a social platform such as YouTube, I felt each episode had two lives. In the first life, it’s about certain issues being touched upon through the characters and through the story line. In the second life, it’s about the audience and the conversation spearheaded by our audience.

for wardrobe. We can only hope to forever change the fashion landscape of Africa as ‘Sex and the City’ did so many years ago in the states and continue to deliver top quality fashion over the many seasons to come.

WANT MORE? Fashion plays a MAJOR role in the series as well as in the lives of the girls. I’d even go as far as calling Fashion the 6th main character!