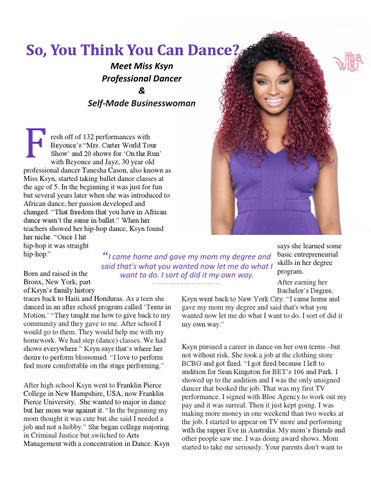 resh off of 132 performances with Beyonce‟s “Mrs. Carter World Tour Show‟ and 20 shows for „On the Run‟ with Beyonce and Jayz, 30 year old professional dancer Tanesha Cason, also known as Miss Ksyn, started taking ballet dance classes at the age of 5. In the beginning it was just for fun but several years later when she was introduced to African dance, her passion developed and changed. “That freedom that you have in African dance wasn‟t the same in ballet.” When her teachers showed her hip-hop dance, Ksyn found her niche. “Once I hit hip-hop it was straight says she learned some hip-hop.” “I came home and gave my mom my degree and basic entrepreneurial said that&#39;s what you wanted now let me do what I skills in her degree program. Born and raised in the want to do. I sort of did it my own way. Bronx, New York, part After earning her of Ksyn‟s family history Bachelor‟s Degree, traces back to Haiti and Honduras. As a teen she Ksyn went back to New York City. “I came home and danced in an after school program called „Teens in gave my mom my degree and said that&#39;s what you Motion.‟ “They taught me how to give back to my wanted now let me do what I want to do. I sort of did it community and they gave to me. After school I my own way.” would go to them. They would help me with my homework. We had step (dance) classes. We had Ksyn pursued a career in dance on her own terms –but shows everywhere.” Ksyn says that‟s where her not without risk. She took a job at the clothing store desire to perform blossomed. “I love to perform BCBG and got fired. “I got fired because I left to feel more comfortable on the stage performing.” audition for Sean Kingston for BET‟s 106 and Park. I showed up to the audition and I was the only unsigned After high school Ksyn went to Franklin Pierce dancer that booked the job. That was my first TV College in New Hampshire, USA, now Franklin performance. I signed with Bloc Agency to work out my Pierce University. She wanted to major in dance pay and it was surreal. Then it just kept going. I was but her mom was against it. “In the beginning my making more money in one weekend than two weeks at mom thought it was cute but she said I needed a the job. I started to appear on TV more and performing job and not a hobby.” She began college majoring with the rapper Eve in Australia. My mom‟s friends and in Criminal Justice but switched to Arts other people saw me. I was doing award shows. Mom Management with a concentration in Dance. Ksyn started to take me seriously. Your parents don&#39;t want to