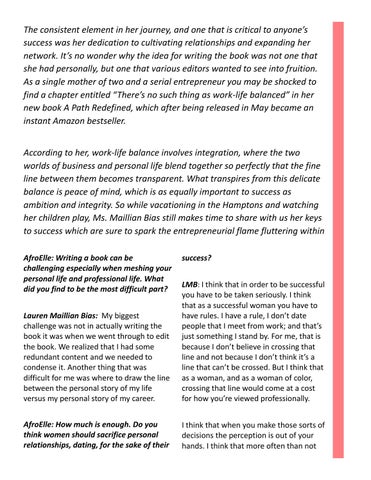 The consistent element in her journey, and one that is critical to anyone’s success was her dedication to cultivating relationships and expanding her network. It’s no wonder why the idea for writing the book was not one that she had personally, but one that various editors wanted to see into fruition. As a single mother of two and a serial entrepreneur you may be shocked to find a chapter entitled “There’s no such thing as work-life balanced” in her new book A Path Redefined, which after being released in May became an instant Amazon bestseller. According to her, work-life balance involves integration, where the two worlds of business and personal life blend together so perfectly that the fine line between them becomes transparent. What transpires from this delicate balance is peace of mind, which is as equally important to success as ambition and integrity. So while vacationing in the Hamptons and watching her children play, Ms. Maillian Bias still makes time to share with us her keys to success which are sure to spark the entrepreneurial flame fluttering within AfroElle: Writing a book can be challenging especially when meshing your personal life and professional life. What did you find to be the most difficult part?

Lauren Maillian Bias: My biggest challenge was not in actually writing the book it was when we went through to edit the book. We realized that I had some redundant content and we needed to condense it. Another thing that was difficult for me was where to draw the line between the personal story of my life versus my personal story of my career.

LMB: I think that in order to be successful you have to be taken seriously. I think that as a successful woman you have to have rules. I have a rule, I don’t date people that I meet from work; and that’s just something I stand by. For me, that is because I don’t believe in crossing that line and not because I don’t think it’s a line that can’t be crossed. But I think that as a woman, and as a woman of color, crossing that line would come at a cost for how you’re viewed professionally.

AfroElle: How much is enough. Do you think women should sacrifice personal relationships, dating, for the sake of their

I think that when you make those sorts of decisions the perception is out of your hands. I think that more often than not