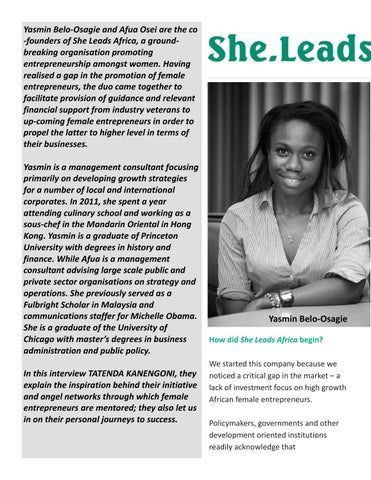 Yasmin Belo-Osagie and Afua Osei are the co -founders of She Leads Africa, a groundbreaking organisation promoting entrepreneurship amongst women. Having realised a gap in the promotion of female entrepreneurs, the duo came together to facilitate provision of guidance and relevant financial support from industry veterans to up-coming female entrepreneurs in order to propel the latter to higher level in terms of their businesses. Yasmin is a management consultant focusing primarily on developing growth strategies for a number of local and international corporates. In 2011, she spent a year attending culinary school and working as a sous-chef in the Mandarin Oriental in Hong Kong. Yasmin is a graduate of Princeton University with degrees in history and finance. While Afua is a management consultant advising large scale public and private sector organisations on strategy and operations. She previously served as a Fulbright Scholar in Malaysia and communications staffer for Michelle Obama. She is a graduate of the University of Chicago with masterâ&#x20AC;&#x2122;s degrees in business administration and public policy. In this interview TATENDA KANENGONI, they explain the inspiration behind their initiative and angel networks through which female entrepreneurs are mentored; they also let us in on their personal journeys to success.

Yasmin Belo-Osagie How did She Leads Africa begin? We started this company because we noticed a critical gap in the market â&#x20AC;&#x201C; a lack of investment focus on high growth African female entrepreneurs. Policymakers, governments and other development oriented institutions readily acknowledge that