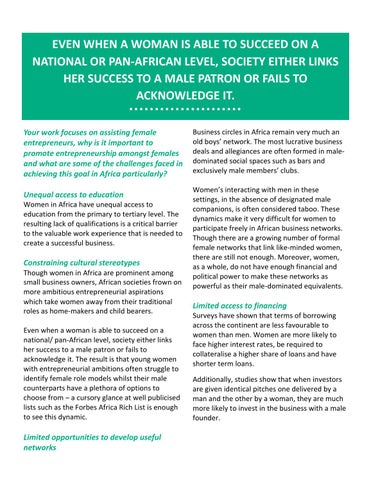 EVEN WHEN A WOMAN IS ABLE TO SUCCEED ON A NATIONAL OR PAN-AFRICAN LEVEL, SOCIETY EITHER LINKS HER SUCCESS TO A MALE PATRON OR FAILS TO ACKNOWLEDGE IT. Your work focuses on assisting female entrepreneurs, why is it important to promote entrepreneurship amongst females and what are some of the challenges faced in achieving this goal in Africa particularly? Unequal access to education Women in Africa have unequal access to education from the primary to tertiary level. The resulting lack of qualifications is a critical barrier to the valuable work experience that is needed to create a successful business.

Constraining cultural stereotypes Though women in Africa are prominent among small business owners, African societies frown on more ambitious entrepreneurial aspirations which take women away from their traditional roles as home-makers and child bearers. Even when a woman is able to succeed on a national/ pan-African level, society either links her success to a male patron or fails to acknowledge it. The result is that young women with entrepreneurial ambitions often struggle to identify female role models whilst their male counterparts have a plethora of options to choose from – a cursory glance at well publicised lists such as the Forbes Africa Rich List is enough to see this dynamic.

Business circles in Africa remain very much an old boys’ network. The most lucrative business deals and allegiances are often formed in maledominated social spaces such as bars and exclusively male members’ clubs. Women’s interacting with men in these settings, in the absence of designated male companions, is often considered taboo. These dynamics make it very difficult for women to participate freely in African business networks. Though there are a growing number of formal female networks that link like-minded women, there are still not enough. Moreover, women, as a whole, do not have enough financial and political power to make these networks as powerful as their male-dominated equivalents.

Limited access to financing Surveys have shown that terms of borrowing across the continent are less favourable to women than men. Women are more likely to face higher interest rates, be required to collateralise a higher share of loans and have shorter term loans. Additionally, studies show that when investors are given identical pitches one delivered by a man and the other by a woman, they are much more likely to invest in the business with a male founder.